These nights, the snow that has taken Geneva by storm glistens magically beneath the local “Festival of Trees and Lights”. Unsettling Christmas baubles dangle from a barren tree at the Square des Alpes – the large spheres look as if radiant red lava is bursting apart their black surfaces. Nearby, at the Rotonde de Mont-Blanc, the flattened tips of conical yew trees have been adorned with one light each: sometimes these lights flicker devlishly red, transforming the trees into huge candles. At other times the lights suddenly start rotating, emitting a heavenly white cone that converts the trees into miniature light-houses. All across Geneva, colorful lights are intertwined with trees.

A single string of festive yellow light-bulbs is strung around the South-Western tip of the lake of Geneva (for example along the Quai des Bergues) – kind of like a single strand taken from the light-bulb-covered Harrod”s department store in London, but without the flashing. The repetitive monotony of the lightbulbs is interrupted by colorful lighted figures from the Pac-Man videogame, with Pac-Man eating the light bulbs and thereby converting them into “pac-dots” and the four colored monsters chasing pac-man. The artists Bufalino Benedetto and Benoit Deseille paid great attention to the details of the actual game: The “bashful” cyan-colored Monster named Inky is far away from everybody else, whereas the “shadowing” red-colored Inky is breathing down Pac-Man”s neck: 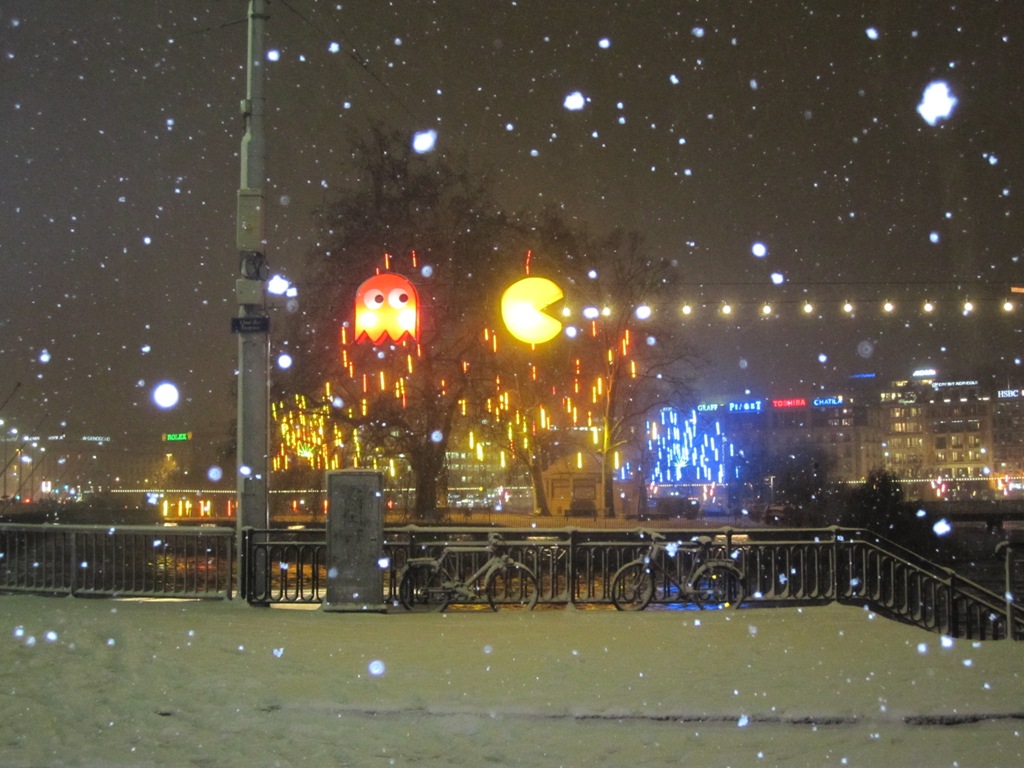 The fact that Pac-Man is depicted in a high-brow art-installation organized by the City of Geneva and funded by banks and other conservative companies shows how deeply the two formerly niche cultures of video games and street art have penetrated high society.

As a matter of fact, the off-screen, real-life depiction of low-resolution, large-pixel video-game characters was pioneered by the French Street Artist “Invader”, who in the movie “Bomb-It” laconically remarks “The name of the game is Space Invaders, and I”m invading space – public space. It was very logical.” According to his , quite a few of his colorful mosaic tiles portraying space invader figures are stuck on walls and other objects in the immediate vicinity of the glowing Pac-Man figures in Geneva.

Also non-Street Artists have paid tribute to the irresistable charme of lovable 1980s polygonal video-game shapes, as can be seen in this human interpretation of Tetris created in Lausanne, not far away from Geneva.

What sets apart the Pac Man installation from preceding artistic video game renditions is that it stops a game midway – and thereby highlights what contemporary street art does not portray:  motion. Invader glues one lone Space-Invader-figure to each public space, thus his artworks are completely taken out of the context of game play – they do not need motion to have an effect. Guillaume Reymond uses an elaborate stop-motion video-filming technique in order to re-introduce motion into his statically sitting actors. Yet Geneva”s Pac-Man, Inky, Blinky, Pinky, and Clyde are all frozen forever atop the surreal winter landscape consisting of snow, lights and lake – poor Pac-Man cannot even reach the closest light-bulb, no matter how tastily it shines at him. It”s not even worthwhile to shout “Run, Pac-Man, Run”, since Blinky will never get him either.

Geneva”s lighted Pac-Man figures may have been freed from the rough edges of their pixels, yet now they are begging to be set free to dash along their Harrods light-bulb-string. And thereby, they raise the question: What would it be like, if real-life Street Art could move freely across real-life streets, the way that virtual video game figures move across their virtual landscapes?

The perhaps most prominent contemporary street artist producing static, motionless, stenciled graffiti is Banksy. According to his dictum, what he hates most about advertising is that it attracts all the bright, creative and ambitious young people. Unfortunately, quite a few commercials show that he may indeed be right. It turns out, that the idea of Street Art in motion may already have been pioneered by the series of advertisements for the Sony Bravia TV set, starting with the 250,000 vibrantly multi-colored bouncy balls flooding the Streets of San Francisco to José Gonzalez”s 2006 acoustic cover of The Knife”s 2002 “Heartbeats”:

Perhaps in a not-so-distance future, liquid crystal displays such as those used in the Sony Bravia TV set will replace the static billboards of our times. That”s when another statement by Banksy will gain importance: “All artists are willing to suffer for their work. But why are so few prepared to learn to draw?”

The future of street art will belong to geeks who are able to hack into the advertising loops programmed to run simultaneously on millions of outdoor LCDs throughout the world in order to insert there own “easter egg” – street art that in fact will move from display to display, cheering up the passer-bys on its route.

Have a bouncy week,

One thought on “Pac-Man in Geneva”